Putting art and science under the microscope – Institute for Molecular Bioscience

They use microscopes on modeling clay and bacterial cultures on blank canvases, but share the imagination and innate curiosity that drives their artist peers.

IMB executive director Professor Ian Henderson said artists and scientists are linked by a desire to answer big questions about the human condition.

“Asking and answering these questions requires creativity and thinking beyond the boundaries of the known, to go beyond current knowledge and thinking to learn something more and ultimately improve people’s lives,” said Professor Henderson.

“Most science isn’t about that big ‘Eureka!’ moment, it’s more about looking at the world and finding something intriguing or interesting to study.

“Scientists – like artists – look at things people have seen before but see them differently,” he explained.

“For example, who would have thought that looking at a funnel web spider in a different way would result in an environmentally friendly pesticide or a drug to treat heart attacks and strokes?”

The aesthetics of science

Form and function are as intertwined in biology and chemistry as they are in art.

“Think of all those beautiful pictures of the universe taken by the James Webb Telescope,” he said as an example.

“It shows the intersection of art and science on a macro level, as we take images like this on a micro level in our labs to show the amazing form and function of cells and microbes.”

This artistic byproduct is celebrated with the Jo Underhill IMB Art Award, given in memory of IMB’s first artist-in-residence who continues to inspire the connection between art and science.

Complementing these images, scientists weave words to tell the world about their work.

“The best scientists are those who are great storytellers and are able to communicate complex ideas in a simple form.

“When an artist steps back and looks at their creation in the same way as a scientist, at that particular moment, they are the only person in the world who knows of its existence and its potential.”

Join Professor Ian Henderson to chat with pop-up installation artists Renzo B. Larriviere and Zara Pasfield of design studio Atelier Sisu at Sip and Science: The Power of Now
Sunday, September 18 at 3 p.m. 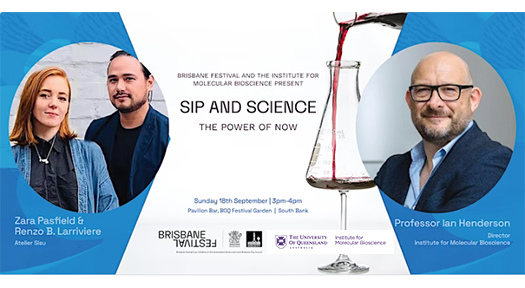 The Sip and Science series explores the intersection of science and art and is brought to you by IMB in partnership with the Brisbane Festival.