The National Gallery of Australia returns 14 works of art, including Chola idols

The National Gallery of Australia (NGA) announced on Thursday that it will return 14 works of art from its Asian art collection to India.

The repatriated artworks include 13 objects linked to art dealer Subhash Kapoor through Art of the Past and one acquired from art dealer William Wolff. The works include six bronze or stone sculptures, a brass processional standard, a painted scroll and six photographs.

Three other sculptures from the Art of the Past have also been removed from the collection. Further research will be undertaken to identify their place of origin before they are repatriated.

Following this action, as well as the repatriation of the works in 2014, 2016 and 2019, the NGA will no longer retain in its collection the works acquired through Subhash Kapoor.

“The decision to return the works is the culmination of years of research, due diligence and an evolving framework for decision-making that includes both legal principles and ethical considerations,” the NGA said in a statement. Press release. 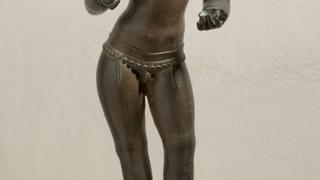 12th century child-saint Sambandar belonging to the Chola dynasty being sent back to India.

NGA Director Nick Mitzevich said: “As a first result of this change, the Gallery will return 14 objects from the Indian art collection to their country of origin. It’s the right thing to do, it’s culturally responsible and the result of collaboration between Australia and India.”

Mitzevich said the Gallery would continue its provenance research, including for the Asian art collection, and resolve the status of any works of concern.

The Indian High Commissioner to Australia, Manpreet Vohra, hailed the decision by the Australian government and the NGA to return the artwork.

S. Vijay Kumar, art enthusiast and co-founder of India Pride, says the latest round of NGA returns marks the end of our decade-long battle with them for transparency and accountability in their acquisitions. Kapoor.